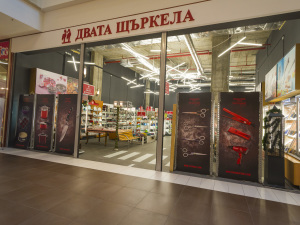 WHO ARE WE, THE 2STORKS?

Company with significant market presence and experience for over 20 years. Importer and producer of the widest selection of professional instruments for manicure, pedicure and artificial nails. Exclusive representative of prestigious companies from
Solingen, Germany for hairdressing scissors, combs, brushes, hairpins, clippers and hair dryers.

The Bulgarian partnership with Solingen

Founded in 1921 by Tzvetko Georgiev in Sofia, Bulgaria’s capital, the company adopted in 1931the logo of the two storks,
who are resting their beaks on each other. The company started to conduct direct import operations and became
the representative for Bulgaria of the best cutlery, electrical razors for hair styling as well as other tools for manicure and pedicure made in the city of Solingen in Germany.  In 1948, the company was forced to stop all commercial operations and cease its trading activity. In 1991, the company was re-registered by the son of Tzvetko Georgiev – Kiril, under the name of “Solingen – Tzvetko Georgiev and son” and it reestablished its trade partnerships with Solingen. The company’s main activities continued to be the representation, import and sale of professional as well as casual instruments and tools for hair dressers, manicurists, pedicurists as well as tools for cooking and meat processing. The trademark of the company was again the same as before – two white storks in a red circle. The family company’s destiny is also closely related to those birds as a sole stork does not bring spring along but two of them definitively signal springtime is coming.